An Electrical Caution if Your Home Was Built between 1950 and 1990! 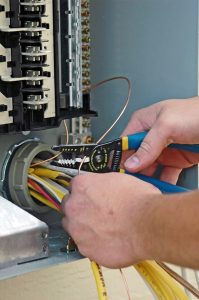 We hope we caught your attention with the headline, because if you live in a Chicagoland home built within that range, you may have a serious fire hazard in your home and not be aware of it.

The trouble is with panels installed between 1950 and 1990 by a now-defunct manufacturer called Federal Pacific Electric Company (FPE). These panels may contain Stab-Lok circuit breakers, which are defective and a serious fire hazard. Millions of these circuit breaker boxes were installed in homes throughout North America between 1950 and1990. Although these malfunctioning panels are responsible for thousands of fires every year, they were never issued a former recall after tests uncovered the defects. Professional electricians urge homeowners who live in houses built before 1990 to check if they have a FBE electrical panel with Stab-Lok breakers and call for an immediate replacement if they do.

But how will I know I have one of these dangerous electrical panels?

It’s not difficult to recognize one if you take a longer look at your home’s breaker box. The name Federal Pacific Electric will be on either the outside or inside of the panel cover. Look over the breakers to see if there are red strips over them marked as Stab-Lok brand. Don’t hesitate to call for a replacement if you find out you have these defective and dangerous breakers in your house. You want this fixed right away!

But I’ve had this panel for years and nothing happened

Unfortunately, the reason the defect in FBE panels has remained undiscovered for so long is that the panels can work fine for many years. But all it takes is one circuit overload or short circuit to create a fire hazard. This isn’t a risk you want to take.

Laboratory tests have shown that Stab-Lok circuit breakers fail to trip at a much higher rate than other breakers. What happens if a breaker fails to trip when there’s an overcurrent? It’s not good! The failed breaker allows a high amount of current from the external electrical supply (i.e. the municipal power supply to your home) to surge into the rest of the electrical system. Stopping this current overload is the point of the breakers. Once the current floods into the house, there’s no way to manually shut off the electric flow. Wires will overheat and melt off their insulation and the panel may catch fire. If your home hasn’t experienced any major voltage surges, the trouble with the FBE panels will go unnoticed—but you’re in danger when/if the surges do hit.

If you find you have a Federal Pacific Electric Company panel installed in your home, you need to call an electrician in Glenview, IL or elsewhere in Chicagoland to replace the circuit breaker panel with a new, safer model. We have extensive experience handling all types of electrical panel replacements and other electrical repairs, and we’re familiar with the hazards of the FBE panels with Stab-Lok breakers. We’ll upgrade your electrical system to keep you and your family safe.

ServiceMax is open 24/7—All Day, Every Day! Call us for any electrical needs in Chicagoland.