Go Ductless and Get Rid of Those Window AC Units 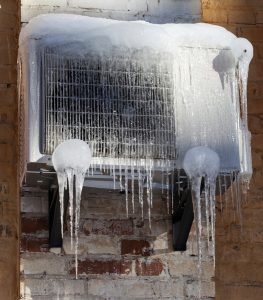 Do you live in a house that uses a boiler for heat and doesn’t have any ductwork to allow for a central air conditioning system? If so, you probably have window AC units around the house to help cool down during the summers.

This makes sense. Window air conditioners block windows, reducing the amount of light in the house as well as obstructing pleasant outdoor views. They aren’t attractive parts of the décor, especially on the outside of the house. They produce high levels of noise because of the compressor. They make a home less secure. They often have to be moved in winter because they let too much heat escape. And they’re simply not powerful enough for most purposes.

There is another option for cooling in your house that won’t require extensive remodeling to add ductwork: The ductless mini split air conditioning system.

How Ductless Systems Are Different From Window Units

If you’ve seen a ductless system before, such as in a commercial building, you’ll notice they resemble window AC units: a blower on the wall sending cool air directly into the room. But that’s about where the similarities end.

Ductless air conditioning uses an outdoor unit like central air conditioning systems, where heat is exhausted to the outside. But rather than the refrigerant and power lines from the outdoor unit going to a single indoor unit that’s connected to the ducts, separate lines go to a number of air handlers around the house. (A single outdoor unit can handle from 4 to 8 indoors unit.) The refrigerant and power lines pass through small holes in the outside walls to connect to the air handlers. Unlike window units, the individual air handlers don’t have to push through the wall, and they are smaller and less obtrusive.

Why Ductless Systems Are Better Than Window Units

In almost every way, ductless mini split systems are far better than window units. They no longer block windows—most are mounted above windows or outside doors. Each indoor unit uses a small fan to send out cooled air, which makes much less noise than the compressor of a window unit. They have far better energy efficiency, and in fact, are often more energy efficient than standard ducted central ACs because they don’t have to deal with heat gain along the ducts.

Most ductless systems are also heat pumps, which means they can work at warming your house as well. This makes ductless mini splits appealing as a whole-house HVAC solution.

Ductless systems do retain the one benefit of window units: you only need to cool down the rooms that need it. Each air handler works separately from the rest, controlled through a remote, and you only need to expend energy running the air handlers in occupied rooms.

Installing ductless air conditioning in Chicago, IL is a simple task for our professionals—the work goes quickly and we can have your home enjoying cool comfort in no time. Call our team today to learn more about what we can do to free you from those old window ACs.

ServiceMax is open 24/7—all day, every day! Schedule all your AC needs with us.